When a band takes the stage there is an invisible performer that no one ever sees — the set list! Like a good DJ the set list does a lot of things to generally drive the tone of the performance:
– sets the tone of the performance early
– builds and lowers energy like the ebb and flow of waves on the beach
– makes sure there aren’t too many songs strung together all in the same key (gets tedious to listeners)
– pays attention to details like how many times the guitarists are swapping acoustic/electric/mando/etc.

So how do you prepare a good set list? I can’t say I know how other bands do it, but ours is a collaborative process that generally changes many times, sometimes right up to the moment before the performance. We also include extra songs “off list” so we can call an audible to shift gears in response to the energy in the room. Here’s what our set list looked like last Friday at the Laughing Goat: 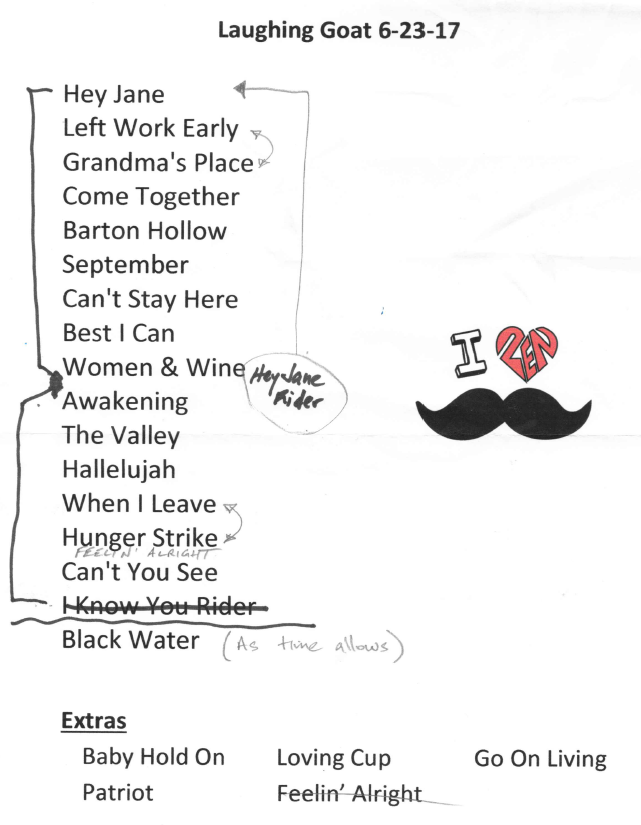 We made a last-minute decision to run Hey Jane fully unplugged, and then to use the last chord of Jane (D) ringing in our ears to launch straight into the a capella lead-in vocals for I Know You Rider. Out of Rider we agreed last-second to swap LWE and Grandma’s Place to keep the mandolin in Ted’s hands. Later in the set, it felt better to run Hunger Strike after Hallelujah and then we followed an instinct to skip When I Leave and instead jump into Feelin’ Alright before closing with Can’t You See.

After all the mish-moshing, we ended up having a fantastic, fun set. And we were 1000% appreciative of the crowd who stayed with us all the way to close! Here’s how the set list finally shook out:

Posted in Musings From All Over | Leave a response